LOYALTY IN THE SHADOWS by Veronica Eden ~ Cover Reveal 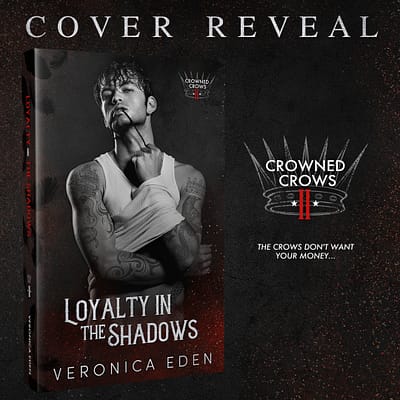 The bestselling Crowned Crows series from Veronica Eden continues with Book II, 𝙇𝙤𝙮𝙖𝙡𝙩𝙮 𝙞𝙣 𝙩𝙝𝙚 𝙎𝙝𝙖𝙙𝙤𝙬𝙨. Ready to go deeper into the shadows of the dark city full of secrets and power? They say crows have a long memory. Never cross a crow.

Thorne Point sunk its claws in me at a young age.

I refused to let its harsh truths snuff out my light.

When an attempt to kidnap me is stopped, I know they’ll never give up.

My only choice is to run into the arms of monsters for safety.

The Crows have a terrifying reputation, and Levi Astor lives up to it.

But my protective monster will never be worse than the ones who buried their ugliness deep in me.

Our unchallenged rule over this city is crumbling.

We’ll hunt down the ones behind this and make them pay.

Guarding the senator’s daughter isn’t on my agenda, yet I couldn’t ignore her if I tried.

Sunshine might break through the shadows, but it will only illuminate what makes me a deadly monster.

Isla Vonn should run in the opposite direction instead of into my arms.

Because everyone fears the Leviathan in Thorne Point.

Pre-Order Your Copy Here!
Add to your Goodreads TBR List!

Veronica Eden is an international bestselling author of dark new adult romances + reverse harem romances with spitfire heroines and irresistible heroes.
She loves exploring complicated feelings, magical worlds, epic adventures, and the bond of characters that embrace us against the world. She has always been drawn to gruff bad boys, clever villains, and the twisty-turns of morally gray decisions. She believes sometimes the villain should get the girl and is a sucker for a deliciously devilish antihero.
Veronica also writes romance as Mara Townsend.
When not writing, she can be found soaking up sunshine at the beach, snuggling in a pile with her untamed pack of animals (her husband, dog and cats), and surrounding herself with as many plants as she can get her hands on.